The History of the Arcadia Neighborhood

With the implementation of the Salt River Valley Reclamation Project after the turn of the century, development of irrigable lands in the suburbs of Phoenix as large, rural homesites became a viable alternative land use. Single, independent construction efforts by some wealthy landowners were not uncommon. An Alternative and more ambitious concept was the development of large tracts of land, specifically for the purpose of creating upper class, rural estates suburbs.  The concept involved assembling sizeable real estate holdings from several owners, then surveying, platting, and marketing the subdivision. Because assembling the necessary real estate in the Valley’s relatively mature agricultural environment was difficult, only one such subdivision emerged in the central Salt River Valley: the Arcadia Subdivision.

The part of Phoenix commonly referred to as Arcadia encompasses the area north of the Arizona Canal and south of Camelback Road between 44th Street and Scottsdale Road. However, the first tract of land platted within this land area was not the original arcadia development, but rather a development called Citrus Homes. First recorded in June 1915 by L.E. Froman, Citrus Homes was bounded by Camelback Road and Lafayette Blvd. to the north, 56th Street to the east, and the Arizona Canal to the south. The Citrus Homes development contained 25 lots which ran from north to south with the southern boundary of each lot bordering on the Arizona Canal.

By dividing the Arcadia Tract into relatively large five to ten acre lots and mandating that no home could be constructed for less than $5,000, the developers were clearly attempting to attract the more affluent homeowner who wanted to live in a rural setting. In effect, these large lots were designed to be sold as small citrus orchards. To this end, Arcadia’s developers, including Seymour Jordan, Robert Grace, and Charles Keafer, highlighted the area’s agricultural potential and hoped that “the purchasers of this land will engage in the growing of citrus fruits.”

In order to successfully develop citrus groves in Arcadia, however, there had to be a stable source of water from which the orchards could be irrigated. While Arcadia was located near the Arizona Canal, because of the slope of the land only the lots south of Camelback Road benefitted from the water source. Therefore, the developers, led by Seymour Jordan, formed the Arcadia Water Company in 1919. This organization constructed several large pumping plants in Paradise Valley capable of supplying 2,100 acres with water. In order to transport this water throughout the Arcadia development, an underground irrigation system was planned. By 1924, construction crews had laid fifteen miles of underground concrete pipe in the area. The dwelling which is currently the Shemer Art Center and Museum was built in 1919 as a residence for the foreman of the water company.

The original financing for the Arcadia plat had fallen through by the mid-1920s, resulting in much of the area being refinanced and replatted by a variety of different owners between 1925 and 1031. These subdivisions included Glencoe Highlands (1925), Arcadia Estates (1926), Arcadia Replatted (1926), Hacienda Allenada (1930), and Alta Hacienda (1931). Although Arcadia was no longer under single ownership,  for the most part the new developers still promoted “Arcadia” as a community for affluent people looking for a rural, estate atmosphere. Not only did lot size remain relatively large, ranging from 4 to 10 acres, but minimum cost restrictions for the construction of homes increased. Additionally, the agricultural potential of the area, particularly the cultivation of citrus groves, continued to be a priority.

There existed several stated requirements concerning house construction in the Arcadia Replat. First, the cost of building a house had to exceed $10,000. This was an increase from a minimum outlay of $5,000 in the 1919 Arcadia Plat. The cost requirement was implemented in order to attract only the most wealthy investors and thereby create an exclusive community. A second requirement for construction concerned wood buildings. All wood buildings had to be stained or painted immediately upon construction. Additionally, in an effort to establish continuity of appearance among houses, all new houses were required to “conform and harmonize with the type and exterior design of neighboring buildings within Arcadia Replatted.”

One of the charming older homes located on the west side of the Central Arcadia area was built by Mrs. Jane Cotton around 1919 or 1924. A later owner had been told the house was built in 1924, but when cement work for the porch was done, a 1919 edition of a newspaper was found in a brick, leading the owners to believe that it could have been built then. The house is constructed of brick with hardwood floors, and it also has a basement. When Mrs. Cotton first lived in the home, wild horses could be seen running along Lafayette Boulevard and, indeed, had the right of way.
On the southwest corner of Lafayette and Avenida del Puente is a home built in 1935 for Ruth Wendell, who was the original founder of the Phoenix Crippled Children’s Hospital. Ms. Wendell was a school nurse from the Globe-Miami area. When she moved to Phoenix, she was concerned for the crippled Indian and Mexican children and began caring for them. The parents of the children she helped wanted to build a house for her. The lot she purchased extended from Lafayette Boulevard south to the canal. The home had cement tile floors, and was made from adobe bricks that were made on the property. When they were working on the house, an Indian put a piece of bread in the wet frame of the doorway. He told Miss Wendell that, “Whoever entered the house would never go away hungry.”

The 1930s also saw the first of the resorts that have graced the district, attracted by the affluent, relaxed residential character of the area as it developed. The Cook Mansion, built by the Thomas Cook Travel Agency family, was converted at that time for this purpose and became the original structure for the Royal Palms Inn. Others developed in the early years in the area were the Jokake Inn, the Paradise Inn, and Elizabeth Arden’s Main Chance retreat, adding to the ambiance of the area.

In the mid 1950s, Phoenix growth reached Arcadia. Although most of Arcadia is now in Phoenix, the area east of 64th Street is in Scottsdale.

Zoning originally limited development to one house per five acres. Large setbacks were provided around the periphery of the five acre parcels. By the mid 1950s, a number of residential developments had begun. One example is the Mountgrove area, formerly the Sphinx Date Ranch, extending from 46th Place to 47th Place and from the Arizona Canal north to Lafayette Boulevard.  The majority of the homes were built in 1954 with careful attention to preserving the Sphinx Date palms, since it was believed that this was the only area in the United States where this variety would grow. To watch for violation of zoning restrictions, the Mountgrove Property Owners Association was quickly formed and a declaration of restrictions was prepared and registered. There was strong feeling of keeping the area residential and, in 1960, the association successfully concluded a lengthy objection to commercial zoning of the date processing plant area on Lafayette between 46th Place and 47th Street.

The quality of construction in the late 50s and early 60sin Arcadia has influenced many people in the area to renovate their homes rather than relocate to newer areas. Home values have steadily increased and the few remaining parcels in the neighborhood have been developed with high quality homes.

In the late 1980s the Phoenician Resort located at 60th Street on the north side of Camelback Road was developed. With its 27 hole golf course and luxurious guest accommodation, it has gained international recognition as a 5 star resort. The old Royal Palms Inn has also been renovated with unprecedented elegance. Its location is on the north side of Camelback Road at Rubicon Drive. Two new residential subdivisions have been developed in the 1990s. Arcadia Estates is located at the southeast corner of Arcadia Drive and Lafayette Boulevard. Royal Palms Estates is developed on what once was the Royal Palms Inn executive golf course.
The area remains in demand because of the unique irrigation system, citrus groves, a quality school system, a strong and active neighborhood association, proximity to neighboring communities and relatively easy access to downtown Phoenix. The natural boundaries of the Arizona Canal on the south and Camelback Mountain on the north have kept the area quiet and insulated from traffic. These advantages are attracting many young families to the area. 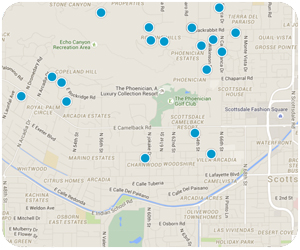